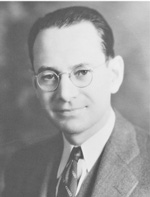 Arthur Leighton Young is remembered for teach­ing the introductory course in agricultural engi­neering. During his long career, he taught more students than any other person in the department.

He came to know many students who have since gained prominence in their professional fields and he always took pride in their accomplishments. In addition to a heavy teaching load in in­troductory agricultural engineering and power and machinery sub­ jects, Young also carried on field studies in combine harvesting losses and tillage. He enjoyed serving as a judge in numerous plowing matches held throughout the state and was also in charge of the horse pulling dynamometer truck used in contests at county and state fairs until World War II.

Although he spent his entire professional career in Illinois, he came from Iowa. Before earning his M.S. in agricultural engineering at Iowa State University, he earned a B.S. in mechanical engineering there and a bachelor's degree in liberal arts and science from Parsons Col­lege. He taught mathematics at Iowa State for a year before coming to Illinois in 1924. He retired in 1958 and was active in the Urbana Ex­ change Club, Boy Scouts, and the Unitarian Church, serving as church treasurer for many years.