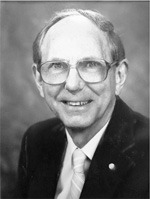 Benjamin A. Jones, Jr. was born on a farm located between Bondville and Mahomet in Champaign County on April 16, 1926, the youngest of two sons. He completed high school in Decatur, then served in the navy during World War II as an avia­tion electronics technician working on radar and communications systems. After the service, he entered the University of Illinois, receiving a B.S. in June 1949 and an M.S. in August 1950, both in agricultural engineering.

After working as an assistant professor and extension agricultural

engineer at the University of Vermont for two years, he returned to the University of Illinois as an instructor in agricultural engineering and began work on a Ph.D. He became an assistant professor in 1954 and in 1958 received a Ph.D. with a major in civil engineering. Jones continued his career at the university as associate professor and head of the soil and water mechanics division of the department. He taught courses in soil and water engineering, directed thesis research, and led teaching, extension, and research efforts in that division. Although his thesis research work was on land drainage, he also conducted re­search on terraces and wrote extension materials on every aspect of soil and water engineering.

Jones became a full professor in 1964 and was named associate di­rector of the Illinois Agricultural Experiment Station in 1973. He became a member of the USDA Committee of Nine, serving four years, one year as its chair. He was elected to ESCOP and while serv­ing on the committee was appointed to the legislative subcommittee, where he assisted in forming agricultural policy at the national level. Jones continued as associate director of the experiment station until his retirement in 1992.

Alumni will remember Jones as a person sought after in positions of leadership that involved planning and development, whether it was for the First United Methodist Church of Urbana, for a new facility for the ASAE, or for planning a new program for the Agricultural Experiment Station.