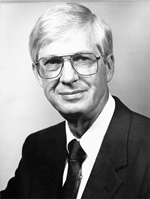 Carroll Drablos was born June 12,1930, near Raub, North Dakota, and began his education in a one­ room country school. He attended Minot High School and Minot Teachers College, taking courses in arithmetic and the sciences. After farming for about a year, he entered North Dakota State University in Fargo, graduating in 1954. After serving as an officer in the USAF with a tour of dauty in Germany, he accepted a position with the Soil Con­servation Service as an engineer in Valley City, North Dakota. He worked in that position for a year, and then accepted an assistantship at NDSU to work on a master's degree in agricultural engineering.

After he finished his M.S. in 1958, Carroll became a research as­sociate at the University of Illinois and began work on a highway drain­age project. This led to his involvement in extension work. Drablos became interested in plastic drain tubing and soon developed an international reputation for his work on plastic drainage materials. A registered professional engineer, Carroll has received numerous hon­ors and awards, including seven ASAE Blue Ribbon Awards for edu­cational aids he prepared. He has been honored with memberships in Epsilon Sigma Phi, Gamma Sigma Delta, and Sigma Xi. He is also an honorary member of the Corrugated Plastic Tubing Manufacturers Association and is listed in Who's Who in the Midwest and in Lead­ers in American Science.

Drablos is best appreciated by students and colleagues for his will­ingness to listen to their problems, for his caring nature, and for his subtle wit.