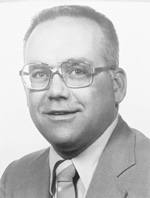 Dean Hoag was born May 13, 1939, in Spencerport, New York. He came to the Univer­sity of Illinois as an assistant professor after receiv­ing his B.S. from Cornell University and his Ph.D. from the University of California in 1968. His M.S.

was from the University of Illinois for work on developing a mechanical stripper to harvest strawberries.

Hoag soon became an authority on the use of analog computers to model the physical properties of plant parts as large as tree limbs or as small as soybean seeds. He taught an instrumentation course for ad­vanced undergraduate students in agricultural engineering and other engineering curricula. Alumni remember him as methodical and de­ liberate in his lectures to ensure that every student understood the material. He was most concerned that his students recognize the un­ changing fundamentals of physical science.

One of Dean's consuming outside interests was baseball. He fa­vored the Brooklyn Dodgers, and his love for the game also found expression in his dedication to the University's team. Hoag died in 1983.