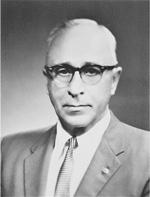 Deane Carter contributed greatly to the develop­ment of the farm structures division in the agricul­tural engineering department during his seventeen years of service. Upon joining the staff in 1941, he helped develop the undergraduate professional cur­riculum and the graduate program. He was an effective and popular teacher and advisor for many students. He also skillfully helped to coordinate and develop all phases of the departmental program.

He served on many policy-making committees of the University, including the executive committee of the Small Homes Council. Before coming to Illinois, he was a staff member at Iowa State Uni­versity, North Carolina State University, and the University of Ar­kansas, where he was head of the department for twenty years.

Carter wrote prolifically. He wrote two textbooks with Foster and Hinchcliff, fifteen experiment station bulletins, eighteen extension circulars, and thirty-nine papers. His subjects ranged from farm structures and hous­ing to tractors and soil conservation. He also served as a national of­ficer of Alpha Zeta for more than fifteen years. He held a number of sectional, regional, and national offices in ASAE and served on three Engineers' Council for Professional Development (ECPD) accreditation committees.

In 1953, Carter visited India as a member of the College of Agri­culture Foreign Program Committee. The assignment led to con­tinuing international programs with the department in India. In 1956, he was named coordinator of international programs under the U of I Provost's Office. After retirement in 1958, he served as a member of the American Society for Engineering Education (ASEE) survey team on engineering education in India and then joined the University of Nebraska contract team to spend two years as a visiting professor at Ataturk University at Erzurum, Turkey.