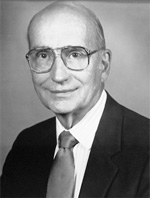 Donald Jedele was born and raised on a small farm at the edge of Denison, Iowa. His father's business was a small grocery store and meat market. Jedele was planning to study business administration at Morningside College in Sioux City, but World War II postponed his plans. While waiting for entry into the navy, he worked as an office boy in the engineering department at Union Pa­cific Railroad headquarters in Omaha. It was that experience that led him to study engineering after the war.

Jedele enrolled in agricultural engineering at Iowa State University in September 1946 and graduated in 1949. He stayed at Iowa State as the manager of the Midwest Plan Service and completed his M.S. in 1954. In January 1956, he joined the U of I staff as an extension spe­cialist and became an advisor to swine producers on confinement swine buildings and waste management. Later he took over the family housing education program, along with farmstead arrangement and beef cattle housing. Farm Structures Day was a program for rural builders that Don organized annually for many years. As a result of this and other programs he was elected into the Rural Builders Hall of Fame sponsored by Rural Builder Magazine. Jedele also worked as a housing specialist with the Tennessee Valley Authority Demonstration Pro­gram coordinated by the Department of Agricultural Economics. There he provided counsel to many Illinois demonstration families as they made improvements to their farmsteads and homes. He was leader of the department's extension programs from 1960 until 1988.

The American Society of Agricultural Engineers honored Jedele with the Gunlogson Countryside Engineering Award, primarily for planning nearly seventy Illinois county extension offices. In 1984 he was elected a Fellow of the ASAE. He retired in 1988.