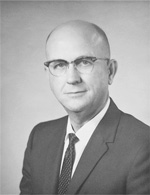 Edwin LeRoy Hansen was born February 2, 1911. He earned his bachelor's degree from Iowa State University in 1935 and received a master's degree in civil engineering from the University of Illinois in 1941. He was then employed by the Soil Erosion Service as an engineer at the Civilian Conservation Corps camp in Mount Carroll, Illinois. Hansen had two periods of service at the University. He was an assistant in the department from 1936 to 1941. From 1941 to 1946, he was an engineer for the Portland Cement Association in Chicago, and in 1947, he was chosen as a member of a four-person team to go to China to improve agricultural conditions there. When he returned, he went into business with his brother and began the Hansen Broth­ers Agricultural Engineering Services at Hillsdale, Illinois. He also served as a member of Overseas Consultants, Inc. in Iran in 1948, which proposed a seven-year development program for that country. After five years, the Hansen brothers dissolved their business, and Hansen established E. L. Hansen and Company at Cordova, Illinois. Hansen returned  to  the  University in 1956 and served as head of the farm structures division until his retirement in 1975. His major research contributions concerned the development of concrete as a construction material in agricultural buildings. He also developed the concept of precast concrete components and concrete rigid frames. Hansen was a leader in confinement housing systems for swine, help­ing develop the "Hog-O-Matic," a facility at the University's farms that featured automatic feeding and floor cleaning.