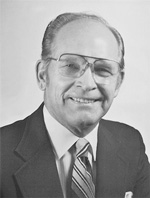 In September 1960, Olver joined the agricultural engineering staff at Illinois. Combining his engineering skills and his knowledge of the dairy industry, he did much of his research on automatic dairy cattle feeding systems. With Hoyle Puckett, USDA cooperator, and the dairy science department, Olver developed technology for automated feeding of dairy cattle, individually and in groups, that was then used on the university dairy farms.

In addition to his work with dairy farm equipment, Olver also served as executive secretary of the Illinois Farm Electrification Council from 1970 to 1980. He headed the electric power and processing division from 1970 until his retirement in 1982. Woodie also taught an under­graduate course in farm electrification and was advisor to many agri­cultural engineering students and to the Ag Council.

Olver took an active role in the leadership and development of ag­ricultural engineering at J. Nehru Agricultural University, Jabalpur, India from 1967 to 1969. He spent 1978 with the Cooperative State Research Service, USDA; this was followed by a special assignment from the university from 1980 to 1982, working with the energy pro­gram of the USDA in Washington, D.C. He served as a part-time assistant to the dean of the College of Engineering for several years after his retirement.