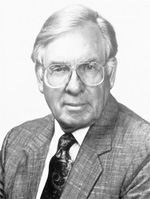 After graduating from the University of Illinois in 1951 with a B.S. in agricultural engineering, Errol Rodda joined the staff of Caterpillar, Inc., spend­ing two of his seven years with the company in Johannesburg, South Africa as a field engineer. He returned to the university in 1958 to pursue an M.S. in agricultural engineering and completed that degree in 1960, as well as an M.S. in civil engineering in 1964. He then went to Purdue University where he finished a Ph.D. in 1965. He became an assistant professor in agri­cultural engineering at the University of California, Davis for a few years, but in 1968 returned to the university's staff with a joint appointment between the Departments of Food Science and Agricul­tural Engineering.

He was responsible for the initiation of the food engineering option and pursued its development through its approval in 1985. In addition to research of interest to food scientists, Rodda's re­search included analysis and design of reinforced concrete and wood structures; grain and seed drying, storage, and damage detection; al­cohol/ethanol production; automated collection of animal produc­tion data; and corn foam loose-fill packing material.

Rodda's international involvement included: University of Illinois/ USAID projects in India from 1968 to 1970 and 1986, Sri Lanka for the United Nations Development Plan (UNDP) in 1974, Egypt on a USAID contract in 1978, Hungary for the World Bank in 1982-83, a 1983 sabbatical leave in China, and team leader for the university TIPAN Project in Pakistan from 1985 to 1987. In 1988, he consulted for the World Bank in Pakistan, followed by World Bank assignments in Egypt in 1990 and 1991. Major emphases of these projects involved grain storage and handling, soybean utilization, agricultural mechanization, and organizational rebuilding of agricultural univer­sities.

Rodda met Erica M. Kohl in February 1954 in Mannheim, Ger­many and married her the following year. Erica was a simultaneous translator for the U. S. Armed Forces and taught English and German at universities in China and Pakistan.