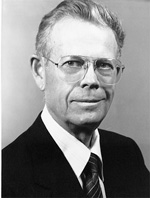 Gene Shove was born and raised on a farm near Havensville in northeastern Kansas. Following eighteen months in the U. S. Army, he farmed for two years and then enrolled at Kansas State Uni­versity in the fall of 1948. He received B.S. and M.S. degrees in 1952 and 1953, and he continued on at Iowa State University for his Ph.D. in 1959. While working on his Ph.D. he served in the agricultural engineering department as an assistant manager of farm services and as an extension specialist in crop drying and storage. He joined the University of Illinois staff in 1958.

His M.S. thesis research on using heat pumps to dry grain was fol­lowed by research on air distribution from grain aeration ducts for his Ph.D. dissertation. After a brief period of studying automatic feed­ handling for livestock, he returned to his work on grain drying and storage.

In the mid-1960s, Shove experimented with the use of refrigera­tion to dry and maintain the quality of shelled corn in storage. Exten­sive laboratory tests and farmers' experiences with insulated drying/ storage installations uncovered many mechanical problems, and the process did not prove practical for midwestern grain producers. The chilled grain drying research did, however, lead to the development of low-temperature grain drying, for which Shove became interna­tionally recognized.

Increases in the cost of fossil-based fuels prompted Shove to obtain funding during the late 1970s and early 1980s to support research on applying solar energy to the drying of crops and other farm uses, such as farm-shop and livestock-shelter heating.

He married Myrtle E. Ellis in 1949. They had two sons, Gregory and Kent, and a daughter, Myrene. Gene C. Shove retired from the university in 1989 after thirty-one years in the department.