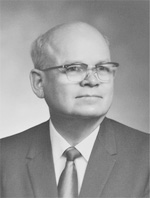 Harry Paul Bateman served as a member of the power and machinery staff for more than thirty years before his retirement. Research in farm ma­chinery operating costs, tillage, and harvesting were his major interests. He was the first staff member in charge of the Agricultural Engineering Research Farm where he conducted extensive studies in minimum and conservation tillage. Major machinery company engineers had high respect for his knowl­edge of tillage practices and they visited him frequently to obtain re­sults from his innovative experiments.

Bateman is one of the first two graduates from the agricultural en­gineering curriculum. He earned a B.S. degree in agriculture in 1932 and a B.S. in agricultural engineering in 1934. Both degrees were awarded with high honors. He continued graduate study to earn a master's degree in mechanical engineering in 1948. After a short term with the Soil Conservation Service, he joined the University of Illi­nois staff in 1935. During World War II, he served as instructor of diesel engines for the U.S. Navy. Following the war, he returned to the staff to conduct research and teach. He taught courses in farm machinery and advised several graduate theses and many special prob­lems. As advisor to the ASAE student branch, he gave valuable guid­ance for several Agrineers.

Bateman also helped teach short courses in farm power and ma­chinery and often conducted extension meetings on tillage practices. Using his hobby, photography, he produced many fine photographs that were used in connection with his work. After his retirement at a relatively early age, he and Lorraine Berry, the retired Piatt County home adviser, were married.