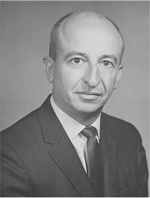 J. Arthur Weber received a B.S. degree from the university in 1942, and after serving three years in the army in Europe, he completed his M.S. degree in 1948.

He joined the agricultural engineering staff in 1946 and distinguished himself as an outstanding teacher and a valuable participant in the team approach to problem-solving. As teacher of the senior power and machinery design course, he won the Stanley Pierce Award for contributing to empathetic faculty-student coop­eration.

Before 1960, Weber's research contributions were most notable in improving tractor maintenance. For example, it is estimated that his research on the application of newer, higher-efficiency, dry-type air cleaners, which eventually became standard equipment on tractors, saved farmers three million dollars annually in overhaul costs. After 1960, his work and that of his graduate students expanded to involve research in the application of power to the soil, including the dynam­ics of tillage, traction, and earthmoving. The national and interna­tional reputation of his research accomplishments led to him being awarded the Paul A. Funk Award in 1974.

Alumni remember Weber as a teacher who had technical capability and a personal commitment to proper execution of assignments. He also had a dedication to answering questions clearly, whether they had to do with technical matters or personal problems.