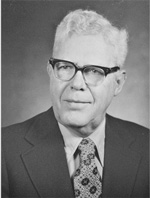 He began his career as an agricultural instructor at Shabbona, Illinois in 1935 and taught there for fifteen years, serv­ing as president of the Illinois Association of Vocational Agriculture Teachers. In 1950, he joined the Vocational Agriculture Service and the Department of Agricultural Engineering staff. In the VAS he prepared teaching materials, including a loan kit program for secondary schools, and in the department, he taught the shop classes devel­oped for students in vocational education. The VAS kit program was recognized nationally as an outstanding example of cooperation be­tween a university and secondary school throughout the state.

Matthews became head of the Vo-Ag Service unit in 1962 and re­tained that position until his retirement in 1976. In 1960-61, he served on the university's contract team to India, where he assisted in the teaching program and the design and building of better bullock-drawn implements and land-leveling equipment for irrigation.

Matthews's friends benefited from his interest in playing and tuning pianos and repairing clocks. John W. Matthews passed away January 5, 2004.