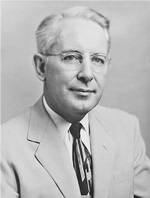 Keith Harry Hinchcliff was the first full-time ex­tension specialist in farm structures and rural hous­ing on the department staff. He came to Illinois in 1944 and served until his death in July1960. Hinchcliff was well known in the University, in professional circles throughout the coun­try, and to rural people throughout Illinois for his outstanding work as a farm buildings specialist. He was an artist and architect who also understood practical building requirements. His special interest was rural house design, and he gave special attention to remodeling the "model-T farmhouse." Development of visual aids for use in exten­sion teaching was also a special interest. His chalk talks to illustrate his subject were considered entertaining and technically informative, and he was in great demand by Illinois farm families interested in home improvement.

His degrees, a B.S. and an M.S. in architecture, were earned at Kansas State University. He worked as an architectural draftsman for the National Park Service in the Lake of the Ozark region, on the University of Arkansas architectural staff, and as an extension special­ist at Mississippi State University before coming to Illinois. His earlier work with Professor Carter in Arkansas was a major factor in his deci­sion to join the staff. In 1953, Hinchcliff and his family went on a two­ year assignment to Indonesia under a U. S. government program. His publication "Leader Training for Self-Help Housing" was based on that experience.