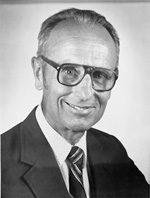 Walter Lembke was born on a farm near Frankfort, Illinois. He graduated from the University of Illinois with a B.S. in 1951 and an M.S. in 1952, both in agricultural engineering. He served in the U. S. Navy during the Korean War as an electronics of­ficer on a destroyer, and after his release from active duty in 1955, he joined the agricultural engineering faculty of Purdue University as an instructor of soil and water courses. He also began work toward a Ph.D. and received that degree in 1961 with research on the flow of water in steep tile drains.

Lembke joined the faculty of South Dakota State College (now South Dakota State University) as an associate professor to teach and conduct research on drainage of irrigated lands. He joined the faculty at Illinois as an associate professor in 1968, became full professor in 1974, and served in that capacity until his retirement in 1987. He led the teaching, research, and extension efforts of the soil and water di­vision from 1973 to 1983 and carried on research in both drainage and irrigation. His favorite activity as a teacher was to encourage stu­dents to experience practical problems.

Lembke and his students studied the impact of drainage systems on water quality and considered the movement of nitrates in soil, find­ing ways to reduce nitrates that could leach into tile drains. The effect of drainage on the timeliness of agricultural operations was also of interest to him. Lembke and his students worked on irrigation sys­tems, using a computer model to determine the needed pump capac­ity for supplying water for irrigation, and investigated the hydraulic conductivity of strip-mined spoil-materials and the effectiveness of water table control as an irrigation practice. In cooperation with mem­bers of the agronomy department, he studied the use of dredged sedi­ment as a topsoil replacement for crop production.

Lembke was active in the American Society of Agricultural Engi­neers, serving as chair of the Soil and Water Division and the several offices related to that position from 1982 through 1990. Lembke retired in 1987, and he continued to remain active in the depart­ment. He taught a course in 1994 and has assisted in drainage projects involving both university land and that of private owners and drain­ age districts. Walter D. Lembke passed away peacefully at home on December 17, 2020.