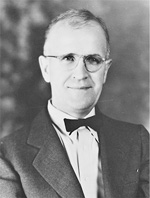 William Arthur Foster initiated the farm buildings and rural housing program at the University of Illinois. In fact, he was the entire division for the sev­enteen years he served on the faculty until his death in 1941. During that period, he taught courses in farm structures and rural housing and developed a farm building plan service. He also served as chair of the farm structures division of the ASAE and vice president of the society. He co-authored two textbooks, Fann Buildings (with Deane Carter) and Home Architecture (with Rexford Newcomb). He contributed greatly to the development of the farm building plan service and was author of numerous bulletins, circulars, and magazine articles.

Before corning to Illinois in 1924, he served as head of the agri­cultural engineering department at the University of Georgia and on the staffs of Iowa State, the University of Pennsylvania, and The Ohio State University, his alma mater. He taught manual arts and drafting in high schools in four states before completing his bachelor's degree in education. That was followed by a second bachelor's degree in pro­fessional architectural engineering, all from The Ohio State Univer­sity. As an architect, Foster spent many long hours over the drafting board and was remembered for his green eye-shade. In addition to his busy academic career, Foster had time to provide professional archi­tectural services. He designed several houses in Champaign-Urbana, including his own residence just off Lincoln Avenue at 812 Delaware Avenue in Urbana.