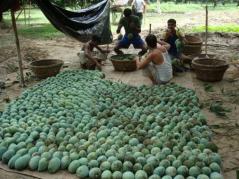 URBANA, Ill. – Bangladesh produces a substantial number of agricultural products, such as mango, and although most other developing countries have adopted modern technologies, post-harvest processing in Bangladesh is still predominantly being done manually. Grading, sorting, and processing is slow going. Add to that poor storage and packaging, inefficient handling and transportation, and other issues. As a result, post-harvest losses, of especially perishable products, can reach 40 to 50 percent.

A University of Illinois researcher, who is originally from Bangladesh, is working to develop inexpensive technologies to help mango growers in his country reduce the time and tedium in at least one aspect of post-harvest processing—sorting and grading.

“There aren’t any computer-based technologies in Bangladesh. Mangoes are hand-picked from the trees and brought by truck to the plant,” says Md Abdul Momin who led the research. “The post-harvest process includes picking up each piece of fruit, weighing it, and sorting it for quality, such as disease or blemishes, and size. A mango weighing 300 grams goes in this pile, 200 gram fruit goes in that pile over there.”

Momin says grading the produce is important as it ensures high-value products that can be sold at premium prices. There is a critical need to quickly, accurately, and efficiently assess agricultural products without the use of human labor.

“Automatic grading and sorting systems that use machine vision to determine size, shape, color, ripeness, weight, bruising, disease, rot, etc., are already being used in many countries,” Momin says. “When I began working with image processing, I thought it might be something that I could adapt to help make mango production in Bangladesh more efficient.”

Momin worked with a student and a mango farm manager. The goal was to develop something inexpensive that could help sort and grade mangoes, particularly during the peak season in the summer when Bangladesh is very hot, labor is scarce, and the volume of harvested fruit becomes overwhelming.

“We used a camera for about $400, a lamp for $50, and tin plate to create a simple way to collect images,” Momin says. “We designed the system using parts that aren’t fancy or expensive. You can even use a web camera that costs about $50 to $100.”

The mangoes are first weighed. Then the camera and light box are used to determine its area.

“The camera takes an image showing that the mango is 30,000 pixels so it belongs in the grade A category with the highest-quality, 300-gram mangoes. Using this technology, we can separate the harvest into large, medium, and small size mangoes,” Momin says.

According to Momin, there is also a consumer preference for roundness. “If they don’t like the shape of the mango, they don’t want to buy it. So we used another parameter called roundness. For this technology, the shape parameter does not translate well to a weight, so that’s an aspect that we need to do further work on.”

In this initial phase, the imaging is done in a box. “When scaled up to a system large enough to operate in the processing plant, it will need to incorporate a moving conveyor belt or some other method to transport the fruit through the imaging area,” says Tony Grift who is a co-author on the research paper.

Momin adds that in Bangladesh, there are banana, tomato and potato crops. And, although this particular research was done on mango, it can be adapted to other fruits and vegetable crops.

Md Abdul Momin is postdoctoral research associate in the Institute for Genomic Biology at U of I. Tony Grift is an associate professor in the Department of Agricultural and Biological Engineering in the College of Agricultural, Consumer and Environmental Sciences at the University of Illinois.