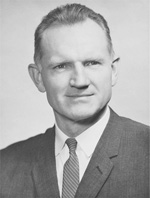 Frank Winston Andrew was born July 15, 1914, on a 330-acre grain and livestock farm located southwest of Palmyra, Illinois. He graduated from Palmyra Community High School in June 1932, and that  fall, he  enrolled  in  the  two-year Blackburn College at Carlinville. While at Blackburn he quickly ad­vanced to head carpenter in charge of campus maintenance and won the tuition scholarship as student work manager while a sophomore.

Andrew received his two-year certificate and transferred his cred­its to the College of Agriculture at the U of I. He worked his way through as a member of the National Youth Administration (NYA) which was the WPA  for college students. One  of Andrew's tasks was to make picture frames for College of Engineering buildings and many of the frames he made are still in use. He earned his room and board by working in Lehmann's nursery at his home.

Frank graduated with a B.S. in agriculture in June 1938 and started farming. Soon he became famous for his circle farming which uti­lized a set of controls on a tractor so it could do field work without a driver. On September 1, 1946, Frank joined the faculty as extension specialist in farm electrification. During his 26-year tenure Frank had a major impact on the adoption by farmers of grain and hay drying systems, automatic feed handling systems, and farm home improve­ments such as water and disposal systems. He was recognized by the IFEC with a Certificate of Appreciation in 1969 and its Merit Award in 1971. Frank has been recognized by ASAE as a Fellow and he re­ceived the George W. Kable Award in 1975.

As an extension engineer, his work took him all over the state and to adjoining states, and he became well known for piloting himself in his single engine plane. He logged more than 200,000 miles in his trips, saving thousands of hours for more productive work than driv­ing down the road.