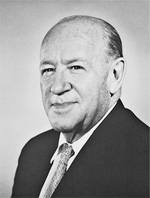 Ray Iris Shawl's service at the University of Illi­nois and in the department spans almost a half cen­tury. He taught power and machinery courses for forty-two years before his retirement in 1958 and conducted research that led to the use of rubber tires and high-compression engines on tractors. He also conducted tests on numerous other subjects, including harvesting, moldboard plows, quality of motor oil, and tractor maintenance. His circular on tractor repair and maintenance served as a standard for many years, and his one-week winter tractor short-courses were well attended for a quarter of a century. Material he developed was used in the first 4-H tractor projects.

Ray graduated in farm mechanics from the University of Illinois in 1916 and took a master's degree in the same subject three years later. He served on the staff continuously after his graduation, other than a short period with the navy during World War I. As a student he was editor of the Illio, played bassoon in the football marching band, and sang in the glee club and chorus. He continued his career in music throughout his working career. For years, he was the oldest member in the marching band. His good humor, hobby of photography, in­terest in students, and practical approach to subject matter are well remembered.