To maximize sugarcane harvesting, use the right blade 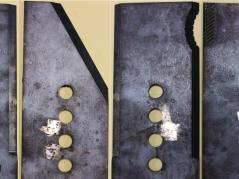 URBANA, Ill. – You wouldn’t use the same knife to cut through a thick steak as you would to slice an angel food cake, right? Although that may be a ridiculous comparison, the same principle holds true when harvesting various crops. One blade doesn’t slice all. Researchers at the University of Illinois tested four blades to find the one that most efficiently cuts sugarcane.

“We were initially looking at harvesting miscanthus, switchgrass, and other biomass crops that use rotary cutters,” says Alan Hansen, lead author on the study and interim head of the Department of Agricultural and Biological Engineering in the College of Agricultural, Consumer, and Environmental Sciences at U of I. “A standard straight blade creates an impact cut. But we wondered if the blade was slightly angled, if it would create more of a slicing action. We wanted to see if it was a better quality cut using a different shape. And if it used less energy in the cutting process.”

Hansen and his team connected with Kondex Corporation, a company that manufactures blades in the United States, to have blades made to match their specifications. Kondex also supplied two additional blades that they had designed themselves to include in the research project and obtain unbiased testing of the blades.

“Sugarcane relies on a regrowth called ratooning. It ratoons for four years. In the fifth year, the farmer replants.” “In order for the regrowth to take place, you need to cut it with the least amount of damage to the stem. If you don’t get a good clean cut, the stalk can shatter and inhibits the regrowth. Ideally, you want as clean a cut as possible and as close to the ground as possible so that the maximum amount of stalk is harvested. It’s quite a challenge to control the cutting blade height as the harvesting machine is running through the field because the ground isn’t uniformly flat.”

Hansen says the Louisiana farmer had already modified his harvester so that the blades were at an angle. “This means that when we installed the newly manufactured angled-edge blades, they were at an even greater angle.”

The serrated edged blade caused the least stem damage overall. The laser clad and straight blades fell in the middle.

Hansen says research to determine the best blade to harvest sugarcane grew out of a larger project that was exploring engineering solutions for biomass feedstock production. That project was divided into five tasks: pre-harvesting, harvesting, transport, storage, and a systems umbrella.

It may be surprising to learn that the United States is the world’s fifth largest producer of sugar. It is primarily produced from sugarcane grown in Florida, Hawaii, Louisiana, and Texas.

Watch a short video of sugarcane being harvested, produced by the Energy Biosciences Institute.

The study, “Effect of four base cutter blade designs on sugarcane stem cut quality,” is published in American Society of Agricultural and Biological Engineers. The research was conducted by Md Abdul Momin, Paul Wempe, Tony Grift, and Alan Hansen.

This project was funded by the Energy Biosciences Institute of the University of Illinois at Urbana-Champaign. The authors would like to thank Kondex Corporation for providing the cutting blades, Brandon Gravois from Edgard, Louisiana, for his support in conducting the field experiments on his farm, and Reajul Alam Chowdhury for his help with the statistical analysis of the data.

Alan Hansen is a professor and interim head of the Department of Agricultural and Biological Engineering in the College of Agricultural, Consumer, and Environmental Sciences at the University of Illinois.